his entirely absorbing movie from Korean-American director Kogonada is adapted from a short story by Alexander Weinstein in his collection Children of the New World; it floats on a Zen updraft of wisdom and ideas. After Yang is an enigmatic sci-fi drama about a family of the future whose AI robot child (a “techno-sapien”) bought by the parents to be a kindly big brother to their adopted Chinese daughter, goes wrong and cannot be fixed. There are touches of Philip K Dick and even Charlie Kaufman, and this is also a pregnant meditation on grief, loss, memory and consciousness.

Colin Farrell and Jodie Turner-Smith play Jake and Kyra, who have an adopted daughter Mika (Malea Emma Tjandrawidjaja) – and also AI bot Yang (Justin H Min), a happy, calm, friendly and very lovable figure of Chinese appearance, programmed with Chinese memories and Chinese knowledge, whom the family has grown to love. When Yang goes into an unexplained coma, it is deeply upsetting: a bereavement-shock far beyond the malfunction of some gadget. Yang was bought secondhand, without guarantee, so Jake is forced to take him to a rackety backstreet repairman who reveals that Yang had been implanted with spyware designed to harvest consumer data, but also that much of Yang’s memory had been recorded. From these recordings, which Jake replays against his own memories of the same events, he learns that Yang had been secretly in love with a local coffee-shop barista, Ada (Haley Lu Richardson), who is a human clone – evidently a commonplace phenomenon in these future times, and who suffer from a widespread caste-racism of which Jake is also revealed to be guilty. 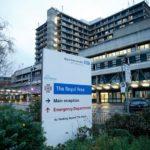 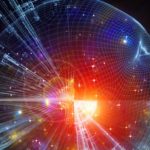 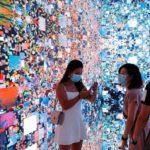